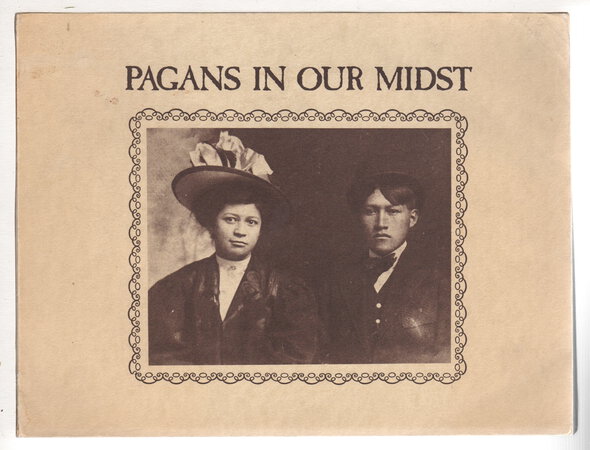 PAGANS IN OUR MIDST.

Mohawk Nation via Rooseveltown, NY: Akwesasne Notes, n.d. (ca 1975). First edition - A book which reveals the consistent racism and use of stereotypes in newspaper accounts, cartoon and advertisements - in this case, in the six newspapers published in the towns close to the lands of the Six Nations in Upstate New York. As the prologue comments, "This book covers the years 1885-1910, a crucial transition period for the Indians of the United States. The wars for the Indians' lands has come to an end and the red man is now trying to adjust to a new way of life on his 'inviolate' reservation. And now a more subtle war to rob the Indian of his cultural identity is about to begin. Through examining newspaper, magazine and official reports dealing with the Iroquois Indians of New York State, one can glean a microcosm picture of the White endeavor to destroy Indian culture throughout the United States." In addition to a very brief history of the Six Nations and of Indian/white conflict in general, the book is divided into sections: The Indians are getting very thievish and unruly; They heed not the law; Like other cannibals, and It is necessary to exert complete control. Illustrated throughout with drawings, cartoons from newspapers and magazines - juxtaposed against the quiet dignity of the people shown in photographs from family albums. Slightly oversized oblong format. xviii, 153 pp.