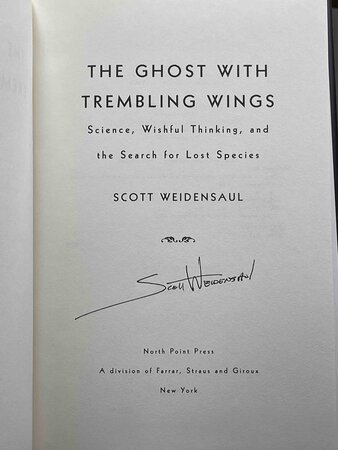 THE GHOST WITH TREMBLING WINGS: Science, Wishful Thinking and the Search for Lost Species.

New York: Farrar, Straus / North Point Press, (2002) dj. SIGNED hardcover first edition - A story about rediscovering vanished species - "Eighty or more times a day, a unique species of plant or animal vanishes forever - the worst global extinction crisis in the last sixty-five million years . . And yet, every so often one of these lost species resurfaces, such as the Indian forest owlet, considered extinct for more than a century when it was rediscovered in 1997. Naturalist Scott Weidensaul pursues these stories of loss and recovery, of endurance against the odds, and of surprising resurrections. The search takes Weidensaul to the rain forests of the Caribbean and Brazil in pursuit of long-lost birds, to the rugged mountains of Tasmania for the striped, wolflike marsupial known as the thylacine, to cloning laboratories where scientists struggle to re-create long-extinct animals, and even to the moorlands and tidy farms of England on the trail of mysterious black panthers whose existence seems to depend on the faith of those looking for them." SIGNED on the title page. Notes and bibliography, index. 341 pp. ISBN: 0-374246645.