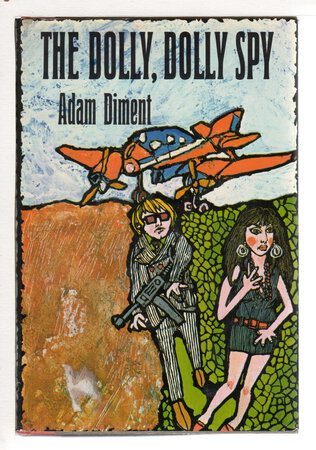 New York: Dutton, 1967. dj. Hardcover first edition - The author's first novel, a cult classic now, which burst on the scene in the late 60s with a record high advance (for the time) when Diment was just 23, and with extravagant praise - this introduced Philip McAlpine, a less uptight Bond, a morally ambiguous spy who was no stranger to drugs and who embraced the permissive society. Ian Fleming had died a couple of years earlier, the Bond movies were big hits, LeCarre had begun publishing his Smiley novels and the book trade was eager to capitalize on the spy market - and this book delivered. An early review said it had "modernity, sex appeal, enormous speed, cheekiness, high-tension, some four-lettered words and great originality." Diment himself was part of the appeal - the back cover of the dust jacket features a photograph of him, smiling broadly beneath his blond mop-top, grooving down the Kings Road flanked by two miniskirted women. 187 pp.

Condition: Fine in a very near fine dust jacket.