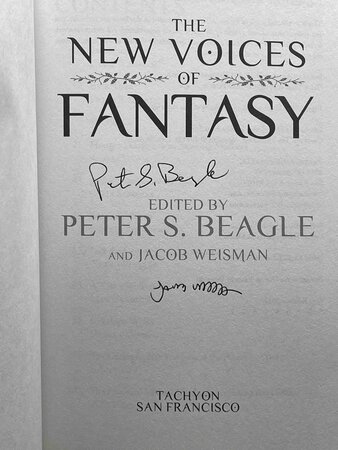 THE NEW VOICES OF FANTASY.

San Francisco: Tachyon Publications, (2017). SIGNED first edition - An anthology collecting 19 stories from some of the genre's most innovative and exciting new voices, stories which "range from the whimsy of Ben Loory's 'The Duck,' about a bird who falls hopelessly in love with a rock, to the horror of Carmen Maria Machado's Nebula Award-nominated 'The Husband Stitch,' a darkly lyrical and deeply disturbing look at a woman with a penchant for storytelling whose life becomes a twisted tale. E. Lily Yu's 'The Cartographer Wasps and the Anarchist Bees' is particularly memorable. A political fable that works on multiple levels, it chronicles a conflict between a nest of imperialistic wasps and a colony of peaceful bees. A few young bees begin questioning the violent new world order and plot rebellion. Other standout selections include Tornado's Siren by Brooke Bolander, a love story featuring a tornado and a girl, and Alyssa Wong's Nebula and World Fantasy Award-winning 'Hungry Daughters and Starving Mothers,' which puts an innovative twist on the vampire mythos with a story about a young woman who, after realizing she can find sustenance consuming people's thoughts, becomes addicted to eating the darkest." (Kirkus) SIGNED on the title page by both editors - Beagle and Weismann. 325 pp. ISBN: 978-1616962579.