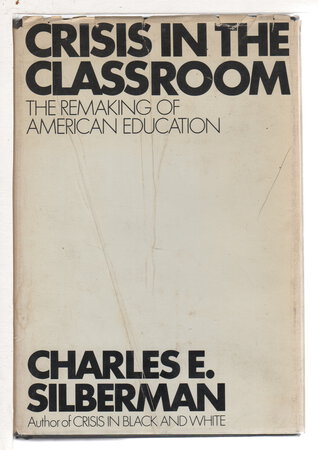 CRISIS IN THE CLASSROOM: The Remaking of American Education.

New York: Random House, (1970) dj. Hardcover first edition - Even though it has been over 50 years since this was published, the crisis in the classroom continues, and this book remains relevant in many ways. From the dust jacket flap: "In this bold new book, the result of a three-and-a-half-year study commissioned by the Carnegie Corporation of New York, Charles E. Silberman examines the problems that beset American education with intelligence, compassion, and uncompromising honesty . . Anyone who is concerned with the nation's public schools and with its colleges and universities will be disturbed by the picture of current practice which Mr. Silberman paints in vivid and painful detail. Many will agree with his insistence that it is not enough merely to ask, How can we bring the worst institutions up to the level of the best? - for all too often, the best is simply not good enough. . . What distinguishes Silberman from other angry critics of American education is the empathy he shows for teachers as well as for children, both of whom are victimized and stifled by the way schools are organized." Index. xii, 553 pp. ISBN: 0-39440823.

Condition: Near fine in black cloth in a fair only dust jacket with significant edgewear (now protected by an archival cover) Original price of $10 still present.