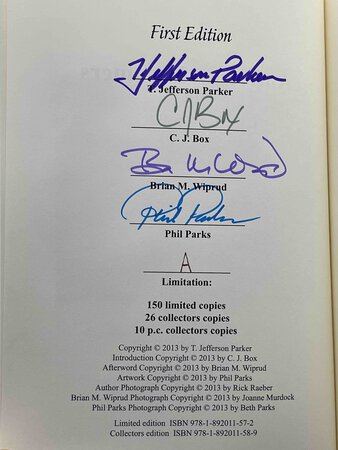 Clarkson, MI and Mission Viejo, CA; A.S.A.P. Publishing, (2013). SIGNED hardcover first edition - One of 26 lettered, Limited Collectors copies of the first edition. This is letter A of 26 such copies bound in tan simulated leather boards with an illustration pasted on the front cover and housed in a wood-grained acryclic slip case. paper covering. A short story about a Diego bookstore owner whose business is failing. In desperation he takes a job from a distant relative that involves driving an 18-wheeler delivering shrimp to New Jersey. Frozen shrimp one way and lobster back - and millions of dollars worth of cocaine. As the body count grows, Griswold's luck holds. Includes an introduction by C. J. Box and an afterword by mystery writer Brian M. Wiprud. Illustrations by Phil Parks. SIGNED by all FOUR contributors on the limitation page. The three authors are all fisherman and in addition to the illustrations by Parks, there are tipped-in color photos which show them with various catches. Total edition limited to 150 copies with 26 Collectors copies and 10 PC copies. 32 pp. ISBN: 978-1892011589.

Condition: Fine in a fine slipcase..