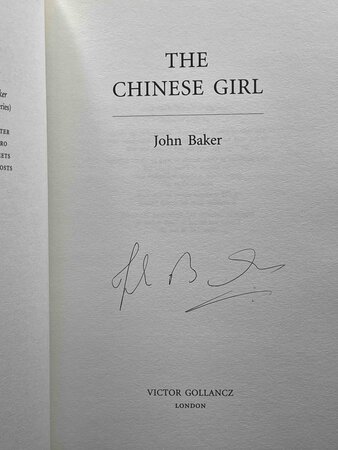 London: Victor Gollancz, Ltd., (2000) dj. SIGNED hardcover first edition - Originally written as a stand-alone novel, following four novels in the Sam Turner detective series, this is the story of Stone, recently released from prison after serving 11 years for murder, burdened with tattoos on his face from a prison attack which make him look scary. He is trying to remain grounded - and determined to avenge himself on the criminal who was responsible for his prison term. Then one night he discovers a battered and unconscious girl in the doorway of his basement flat, and everything begins to change. Ginny - the "Chinese girl" is actually Vietnamese, adopted by an English couple and now living in Los Angeles. She has returned to Hull in search of her best friend, after Juliet's letters abruptly stopped and she went missing. This has been described as very different from his earlier books but "equally brilliant" - a novel with its share of violence but an underlying sweetness and belief in humanity. In a 2007 interview Baker described this as the most difficult of his novels to write, since it was originally conceived epistolary novel - some of the letters still survived into the final form. SIGNED on the title page. 230 pp. ISBN: 0-575070153.