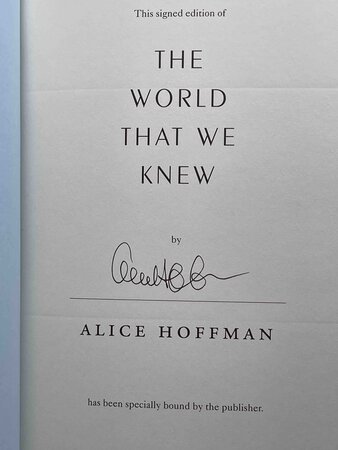 THE WORLD THAT WE KNEW.

New York: Simon & Schuster, (2019) dj. SIGNED hardcover first edition - "In 1941, during humanity's darkest hour, three unforgettable young women must act with courage and love to survive. . . In Berlin, at the time when the world changed, Hanni Kohn knows she must send her twelve-year-old daughter away to save her from the Nazi regime. She finds her way to a renowned rabbi, but its his daughter, Ettie, who creates a mystical Jewish creature, a rare and unusual golem, who is sworn to protect Lea. Once Ava is brought to life, she and Lea and Ettie become eternally entwined, their paths fated to cross, their fortunes linked." SIGNED by the author on a tipped in page which states, "This signed edition . . has been specially bound by the publisher." A Barnes & Noble Exclusive Edition and includes a bonus essay by Hoffman on golems. 382 pp plus a 1 p publisher ad. ISBN: 978-1982141998.