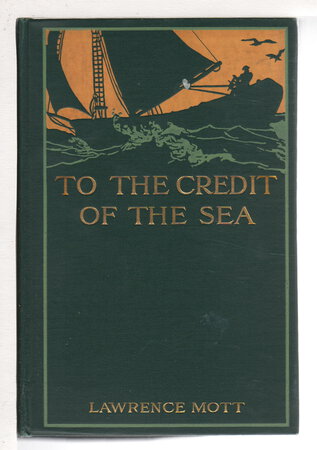 TO THE CREDIT OF THE SEA.

New York: Harper & Brothers, 1907. Hardcover first edition - A collection of eight dramatic interconnected stories which reveal the hard, adventurous life of fishermen on the Labrador coast. Mott's own life included many years at sea and in the outdoors. In 1912, he sailed to China as purser on a freighter with a light opera singer disguised a cabin boy (many years later they were eventually able to be married), and in his later years he established a fishing camp on the North Umqua River in Oregon - where a section of the trail is named in his memory. Illustrated with a frontispiece with a tissue guard and five internal glossy plates. 296 pp. ISBN: B08MQ6D9FL.

Condition: Very near fine in illustrated dark green cloth with gilt lettering - a tight , straight and sturdy copy, with a rather inconspicuous embossed stamp of the previous owner.