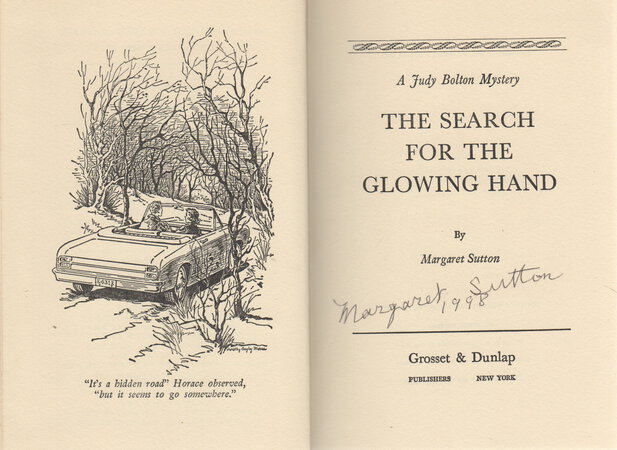 THE SEARCH FOR THE GLOWING HAND: A Judy Bolton Mystery, #37.

New York: Grosset & Dunlap, (1961). SIGNED hardcover first edition - Very uncommon later title in this series - lists to itself at the front of the book, to #34 on the back cover. The Judy Bolton series was my favorite series as a young girl: I liked them for the realism: Judy starts out as a high school girl, has some of the usual problems all kids encounter including misunderstandings among friends, etc, is a little older and more mature in each book - in fact, she gets married, and eventually she and her husband even adopt a child. Although I didn't know any of the history of the series at the time I was reading them, the "mysteries" are mostly based on actual events in Sutton's home town and often are amazingly relevant even today (in this story, the bombing of a mosque triggers the later events), and unlike most of the other series books published by Grosset and Dunlap, this was not part of the Stratemeyer Syndicate. Because of the opposition of the Stratemeyer Syndicate, this series did not have the extensive reprinting that the Nancy Drew and Hardy Boys had, and the last few titles in this series are extremely hard to find. SIGNED by Sutton on the title page and dated in 1998! Frontispiece plus internal illustrations, "haunted house" scenic endpapers. 172 pp.