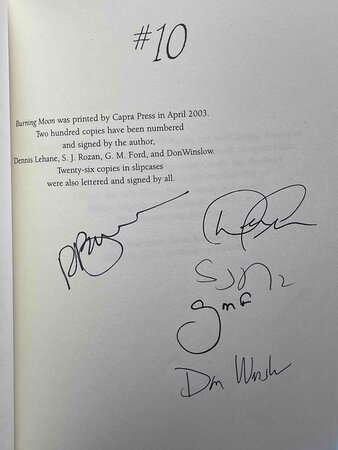 Santa Barbara: Capra Press, (2003). SIGNED hardcover first edition - A thriller by this award-winning novelist featuring Southern California surfer-turned-private eye, Wil Hardesty, who is hired by a Vietnamese refugee and fisherman, Vinh Tien who is sure that the disappearance at sea of his son, Jimmy wasn't accidental. One reviewer noted that "Burning Moon ignites slowly, as its underappreciated author outlines the cultural dynamics that are essential to this tale and reintroduces Hardesty. However, Barre's vivid but economical prose and strong character development eventually make this shine." #10 of only 200 copies numbered and SIGNED on the limitation page by Richard Barre, Dennis Lehane, S, J, Rozan, G. M. Ford and Don Winslow (all of whom contributed blurbs to this title) . 348 pp plus limitation page. ISBN: 1-592660118.