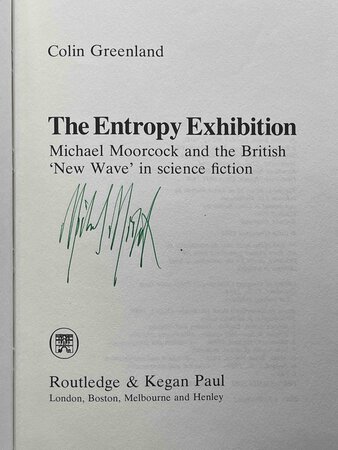 THE ENTROPY EXHIBITION: Michael Moorcock and the British "New Wave" in Science Fiction.

London: Routledge & Kegan Paul, (1983) dj. SIGNED hardcover first edition - The first critical assessment of the literary movement known as "New Wave" science fiction. Michael Moorcock edited and produced the magazine New Worlds from 1964 to 1973. and in it, he encouraged the development of new kinds of popular writing - the essential paradox of the writing lay in its fascination with the concept of "entropy" - the universal and irreversible decline of energy into disorder. The New Worlds writers were not concerned with the far future and outer space, but with the ambiguous and unstable conditions of the modern world. As Ballard put it, "the only truly alien planet is earth." This study gives detailed attention to of the three main contributors to the New Worlds magazine - Michael Moorcock, Brian Aldiss and J.G. Ballard. SIGNED on the title page by Moorcock and uncommon thus. Notes, bibliography, index. xii, 244 pp. ISBN: 0-710093101.