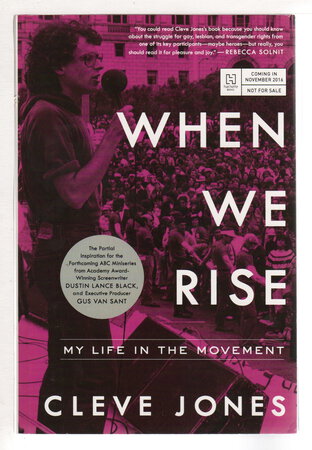 WHEN WE RISE: My Life in the Movement.

New York: Hachette Books, (2006). SIGNED first edition - Autobiography of a gay activist in San Francisco. "Born in 1954, Cleve Jones was among the last generation of gay Americans who grew up wondering if there were others out there like himself. There were. Like thousands of other young people, Jones, nearly penniless, was drawn in the early 1970s to San Francisco, a city electrified by progressive politics and sexual freedom. Jones found community - in the hotel rooms and ramshackle apartments shared by other young adventurers, in the city's bathhouses and gay bars like The Stud, and in the burgeoning gay district, the Castro, where a New York transplant named Harvey Milk began shouting through his bullhorn, and soon became the nation's most outspoken gay elected official. When Milk was killed by an assassin's bullet in 1978, Jones took up his mentor's progressive mantle - only to see the arrival of AIDS transform his life once again." SIGNED on the dedication page, and uncommon thus. 2017 Lambda Literay Award Winner x, 291 pp.