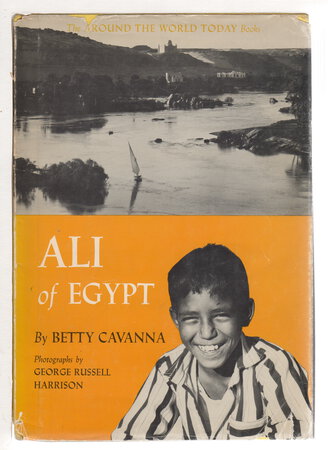 New York: Franklin Watts, (1966). SIGNED hardcover first edition - A title in the "Around The World Today" books by Cavanna and Harrison, a series which introduces children to what is going on in the world today through the stories and photographs of children in those countries. Set in 1966 when the High Dam at Aswan was under construction, this is the story of Ali whose father was working on the dam. Even though Ali is excited about the changes coming he has a friend who has already been displaced by the waters by the building of the Aswan Dam. Illustrated with black and white photographs by Cavanna's husband, George Russell Harrison. Harrison had been Dean of Science at MIT, until his retirement in 1964, shortly before they started collaborating on these books. INSCRIBED on the half title page and SIGNED by both the author and photographer and dated in the year of publication. 68 pp.

Condition: Very good in a good dust jacket (corner of board bumped, dj has overall edgewear, sunning to spine and chip at base of spine) Very uncommon signed. .