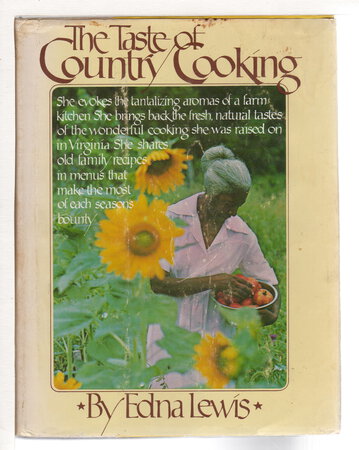 THE TASTE OF COUNTRY COOKING.

New York: Alfred A. Knopf, 1977. dj. Hardcover - The second cookbook by this award-winning chef, one which broke barriers for both African American women and the South. It was one of the first cookbooks by a Black woman to reach a national audience, and is still considered "essential reading for many up-and-coming chefs." who aspire to her level of knowledge, expertise, and ability to speak to the reader through a wonderfully personal lens. Through her writings, Lewis had the ability to teachboth recipes and history about the Southand share portions of her life by way of cooking. This book "celebrates the uniquely American country cooking she grew up in a small Virginia Piedmont farming community that had been settled by freed slaves, [one of whom was her own grandfather]." It includes menus for each season, focusing on fresh food and with details on the way her family prepared food. Illustrated with drawings. Index. xv, 260, viii. ISBN: 0-394483111.

Condition: Near fine in a good only dust jacket with some crinkling, chip to upper edge of back cover. While not a first, this is rather hard to find in any early printings of the original edition.