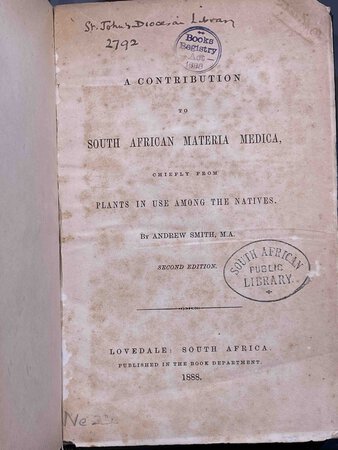 A CONTRIBUTION TO SOUTH AFRICAN MATERIA MEDICA Chiefly from Plants in Use among the Natives.

Lovedale, South Africa: Published in the Book Department, 1888. Hardcover - Uncommon second edition of this early work on South African indigenous medicine, which was first published in 1885. The preface notes that although there is still work to be done, the first edition has been sold out, and so a new edition was appropriate, Among the Native contributors who are acknowledged in the preface is W. W. Gqoba and the students of Lovedale. Includes indices of the botanical, Kaffir, English and Dutch names of the plants. viii, 163 pp. plus errata.