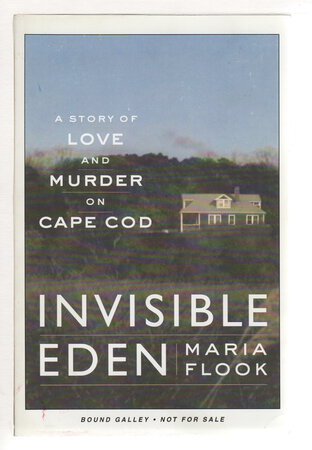 INVISIBLE EDEN: A Story of Love and Murder on Cape Cod.

New York: Broadway Books, (2003). First edition - An investigation of a crime that "riveted the nation" - the story of how a world-traveled fashion writer who had chosen to live as a single mother in Truro on Cape Cod became the victim of a brutal and -at the time this book was published - still-unsolved murder. "Flook intricately maps Christa's charged life before her death and follows the first year of the murder investigation with the help of the district attorney who is in an election battle even as he searches for the killer. At the same time, this book captures the Cape's haunted landscape, class stratifications, and never-ending battles between its weathy summer residents and its hardscrabble working families who together form a backdrop for a powerful chronicle of love and murder." Reading this book does not inspire confidence in the police investigation, nor in the fact that justice has been done in the conviction of the supposed murderer. References. 406 pp.