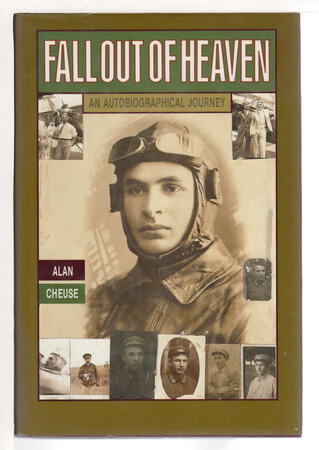 FALL OUT OF HEAVEN: An Autobiographical Journey.

Salt Lake City: Peregrine Smith Books, 1987. dj. Hardcover first edition - A book in which Cheuse attempts to come to terms with his "old world" father, a Bolshevik aviator who had defected, an intertwining of his father's story, of Cheuse's own youth in New Jersey, and the account of the trip Cheuse took to Russia. "As an aspiring young writer, Cheuse was entreated by his father, Philip, to read his manuscript of his adventures as an airplane pilot for the Red Army Air Force. . . Nearly 20 years later, four years after his father's death, Cheuse, now an established writer, does read the manuscript, is entranced by this brave young pilot he'd only barely known, and decides to travel to Russia with his own son, Josh, to visit the scenes of his father's childhood and youth." (Library Journal) Photographs. 308 pp. ISBN: 0-879052732.