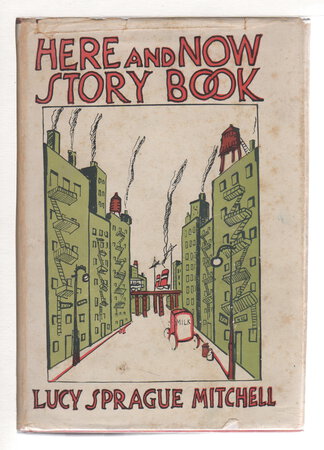 HERE AND NOW STORY BOOK: Two to Seven Year Olds: Experimental Stories Written for the Children of the City and Country School (formerly the Play School) and the Nursery School of the Bureau of Educational Experiments.

New York: Dutton, (1937, c 1921) dj. Hardcover - Lucy Sprague Mitchell - who was the first Dean of Woman at the University of California, Berkeley and later founded New York's Bank Street College of Education, believed that very young children were better served by stories rooted in everyday experience, instead of traditional fairy tales, mythology, and folklore (personally, I favor fairy tales). Although she describes the stories as "experimental" this book includes a long introduction (72 pages) in which she lays our her arguments for why stories in the "here and now" are preferable to less realistic fiction. In addition, each story has a brief introduction explaining the origins of the story - usually from spontaneous comments by children. While this might have been controversial at the time, it nevertheless had numerous printings between 1921 and 1937, the date of the 18th printing - and it was a landmark in American progressive education. Illustrated with a color frontispiece and numerous line drawings by Hendrik Willem van Loon. 300 pp.

Condition: Near fine in red cloth with a black lettering and illustration on the front cover, in a very good example of the uncommon dust jacket (some edgewear, small chip at the top of spine)