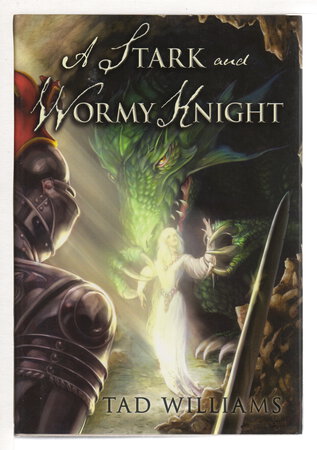 A STARK AND WORMY KNIGHT: Tales of Science Fiction, Fantasy and Suspense.

Burton, MI: Subterranean Press, (2012) dj. Hardcover first edition - An uncommon collection of shorter fiction by this author best known for his epic fantasy novels. Included are short stories, novellas, and the script for a proposed series of DC Comics that never came to fruition as well as a screenplay for a movie still unproduced. The title story is a tale within a tale of dragons and knights and is notable for its wit and verbal inventiveness. The stories include 'The Storm Door' which uses The Tibetan Book of the Dead to forge a new approach to the traditional zombie story. 'The Terrible Conflagration at the Quiller's Mint' which offers a brief, independent glimpse into the background of Williams's Shadowmarch series and 'Ants' which provides an ironic account of what can happen when a marriage goes irrevocably wrong. Introduction by Williams. 442 pp. ISBN: 978-1596064614.