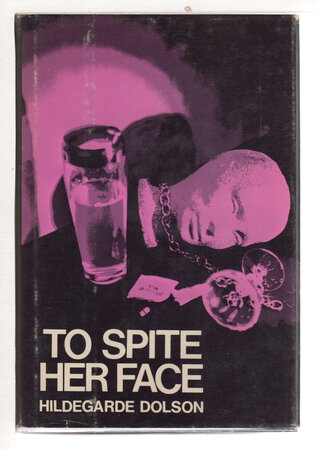 TO SPITE HER FACE.

New York: Lippincott, (1971) dj. Hardcover first edition - A light hearted and witty whodunit introducing the mystery-solving team of Lucy Ramsdale and Inspector McDougal. Among the volunteers of the Second Run Thrift Shop one of the very topics of gossip is the transformation of Marion Colter from an ugly duckling to a restless - thanks to plastic surgery - that is, until Marion is poisoned at a large cocktail party. Although Dolson described herself as a "self-made spinster: in 1965, at 56, she met mystery writer Richard Lockridge and they were soon married - and it was after her marriage that she started writing mysteries. This book is dedicated to "Dick, my accomplice in crime . . ." 225 pp.

Condition: Very near fine in a near fine dustjacket (some light toning and rubbing to the dj, original price of 5.95 still present in lower corner of front flap). Uncommon in the first edition.