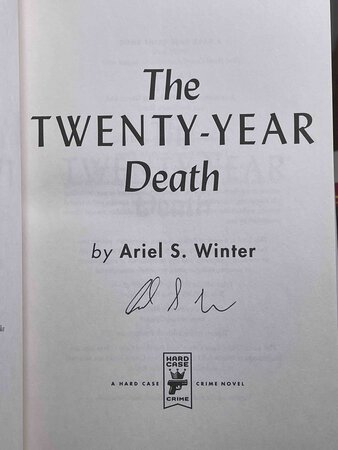 London & New York, Hard Case Crime Book/Titan Books, 2012. dj. SIGNED hardcover first edition - A unique - and massive - book, with dust jacket praise from such diverse writers as John Banville, Stephen King and many others: "A first novel written in the form of three separate crime novels, each set in a different decade and penned in the style of a different giant of the mystery genre. The body found in the gutter in France led the police inspector to the dead man's beautiful daughter - and to her hot-tempered American husband [Simenon]. A hardboiled private eye hired to keep a movie studio's leading lady happy uncovers the truth behind the brutal slaying of a Hollywood starlet [Chandler]. A desperate man pursuing his last chance at redemption finds himself with blood on his hands and the police on his trail [Jim Thompson]." SIGNED on the title page. 670 pp. ISBN: 978-0857685810.