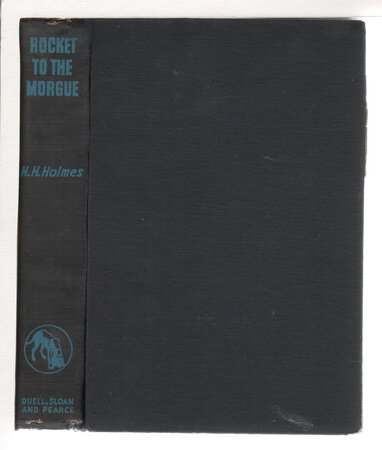 ROCKET TO THE MORGUE.

New York: Duell, Sloan and Pearce, (1942). Hardcover first edition - Both a classic locked room mystery and a roman a clef novel set in the science fiction writing world in Los Angeles in the years before World War II. This was the second locked room mystery written by Boucher under this pseudonym and featured once again the team of Sister Ursula of the fictitious convent 'Sisters of Martha of Bethany,' and Los Angeles police detective Terence "Terry" Marshall. Many of the characters are thinly-veiled versions of personalities such as Robert A. Heinlein ("Austin Carter") and L. Ron Hubbard ("D. Vance Wimpole"), Some writers' actual pseudonyms were used for minor characters, including "Anson Macdonald" and "Lyle Monroe" (both Heinlein pseudonyms), and Boucher himself appears under his real name of William Anthony Parker White. A Haycraft-Queen Cornerstone. 279 pp.

Condition: Good+ condition overall in black cloth with blue lettering on spine - a bit of fraying to ends of spine and wear to corners, names on front endpaper and a thin homemade pocket on rear pastedown. Synopsis from front flap of dust jacket has been pasted inside the front cover. Overall a tight and sturdy copy, very readable,