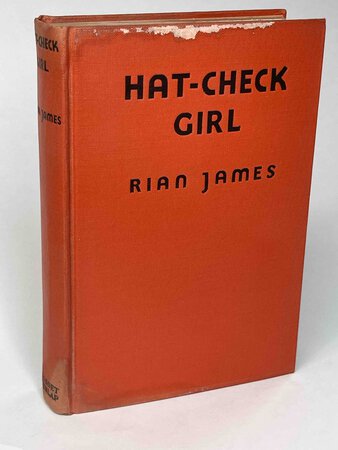 New York: Grosset & Dunlap, (1932) dj. Hardcover first edition - A surprisingly difficult to find title by this rather prolific author and screenwriter. Photoplay edition illustrated with stills from the 1932 Fox film of the same name and featuring Sally Eilers and Ginger Rogers. Set - like most of his books - in New York City, this is a novel in which the underworld and upperworld meet: when a millionaire's son, who has been courting Gerry, the hat check girl, is arrested for murder, it is up to her to save him - and true love wins out. Wikipedia refers to James as "a 'Jack of all trades', - a columnist covering arts and entertainment for the Brooklyn Eagle from about 1928 to 1935. He later was a foreign correspondent, parachute jumper, stunt man, airmail pilot, Air Force lieutenant, vaudeville actor, and finally, writer, director and producer." Only one copy of this edition listed in Worldcat. Includes a frontispiece and three internal glossy plates. 286 pp.

Condition: Good only in orange boards with black lettering in a fair copy of the uncommon dust jacket - some damage from dampness to the upper edge, with bleeding from the cloth to the top of the front endpaper and the first several pages, but otherwise sturdy and straight with sharp corners, etc. The dust jacket has overall edgewear, some loss to the top edge, chipping and tearing to the ends of the spine - but the front cover is still attractive, and the dj is complete.