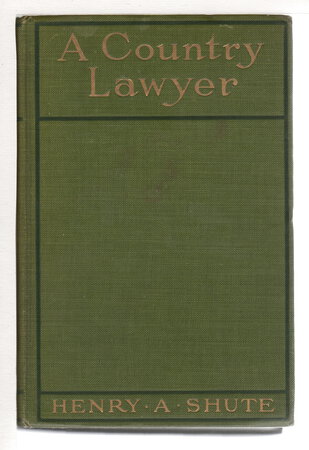 Toronto & Boston: William Briggs / Houghton Mifflin, 1911. Hardcover first edition - Shute was a judge in Exeter, New Hampshire, as well as a farmer, author and musician, best known for the many novels and stories he wrote about a gang of "bad boys" - many which were published in the Saturday Evening Post and collected into 18 novels. He named his main character after himself, using his childhood nickname of Plupy and the gang of rambunctious boys who surrounded Plupy had names like Newt, Beany, Pewt, Nibby, Bug, Fuzzy, Skinny, Whack and Boog many were based on real Exeter personalities. Although this novel begins melodramatically with the fatal shooting of a blackguard named Tarantula in a tavern in a mining camp, it quickly returns to New England and is partially based on his own experiences as a country lawyer. Illustrated with a colored frontispiece with a tissue guard and seven glossy plates with black and white drawings by Irene Deremeax. 431 pp.