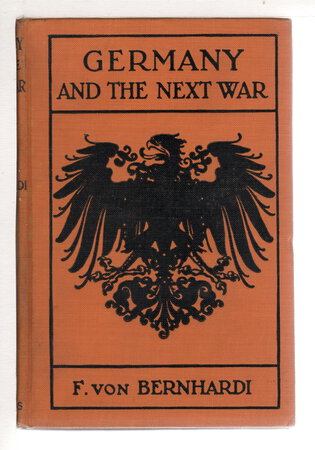 GERMANY AND THE NEXT WAR.

New York: Longmans Green & Co, 1914. Hardcover first edition - The best known book by this Prussian general and military historian, originally published in Germany in 1911 - a book which extolled war as being an essential part of the natural order. The first two chapters are titled "The Right to Make War" and "The Duty to Make War" while Chapter 5 is ""World Power or Downfall" and other sections comment on "the intellectual supremacy of Germany." In 1912, after the book's publication in Germany, the New York Times ran a long article under the headline "WAR IS RIGHT, PEACE WRONG, SAYS GERMAN GENERAL; Von Bernhardi, Well-Known Cavalry Officer and Author of Works on Strategy and Tactics, Lauds Warfare as Highest Expression of Civilization and Denounces All Forms of Peace Propaganda." While this did not represent the official government position, and in fact, much of it was criticism of the government for lack of preparation for war and backing down in international negotiations, it did reflect some popular ideas at the time, including the Darwinian concept of "survival of the fittest." This is the "Authorized American Edition" translated by Allen H Powles. viii, 288 pp.

Condition: Very good in orange cloth cover with black lettering and illustration of eagle -some discoloration to the cloth on the spine although the title is still easily read, and the usual toning to the pages..