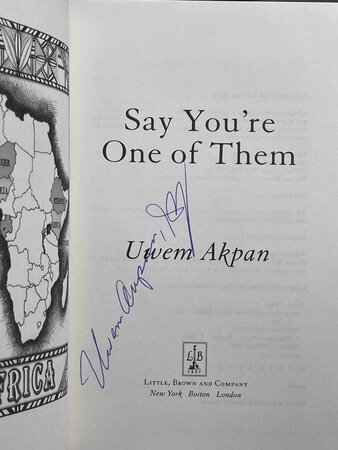 SAY YOU'RE ONE OF THEM.

New York & Boston: Little Brown, (2008). SIGNED hardcover first edition - Nigerian author's prize winning first book - a collection of five short stories, each set in a different country in Africa, and each a testament to the incredible resilience of children. From a family living in a makeshift shanty in urban Kenya in "Ex-Mas Feast" to a a Rwandan girl who relates her family's struggles to maintain a facade of normalcy amid unspeakable acts, and a young brother and sister coping with their uncle's attempt to sell them into slavery, the toll of poverty and religious conflict becomes clear. Louise Erdrich called this book "A beautiful, bitter, compelling read. The savagely strange juxtapositions in these stories are grounded by the loving relationships between brothers and sisters forced to survive in a world of dreamlike horror. Open the book at any page, as in divination, and a stunning sentence will leap out. Newspaper facts are molded by Akpan's sure touch into fictional works of great power." SIGNED on the title page. Winner of the Commonwealth Writers Prize for Best First Book (Africa Region) 2009 and PEN/Beyond Margins Award 2009, and was a finalist for the Los Angeles Times Art Seidenbaum Award for First Fiction among other honors. The author has his first novel, second book, coming out in November 2021. Map frontispiece. 358 pp. ISBN: 978-0316113786.