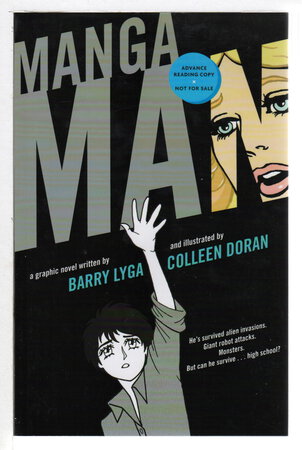 New York & Boston: Houghton Mifflin, 2011. First edition - "Sci-fi adventure meets love story - and East meets West - in Mangaman, an original
graphic novel for teens. Ryoko, a manga character from a manga world, falls through the Rip into the real world - the western world - and tries to survive as the ultimate outsider at a typical American high school.. . 'Panel-holed' for being different, Ryoko has to figure out how to get back to his manga world, back through the Rip . . . all while he has hearts for eyes for a girl from the wrong kind of comic book. . . Lyga writes a metafictive masterpiece as manga meets traditional Western comic book style, while Colleen Doran combines manga techniques and conventions with Western comic book." 126 pp.