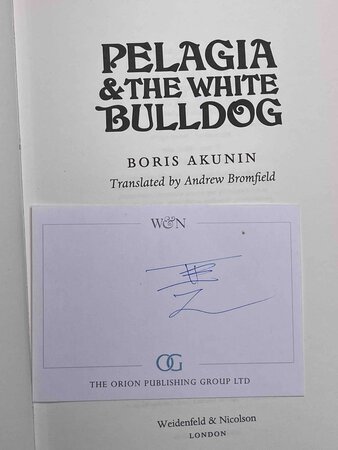 PELAGIA AND THE WHITE BULLDOG.

London: Weidenfeld & Nicolson, (2006). SIGNED (on a bookplate), hardcover first edition - The first Sister Pelagia mystery, set at the end of the 19th century in a small town in Russia, where a bulldog has been found poisoned. When Sister Pelagia is summoned by the bishop to investigate this, things take a more sinister turn with the headless body of a man and a young boy found in the river. Translated from the Russian by Andrew Bromfield. SIGNED bookplate laid in. 295 pp. ISBN: 0-297848623.