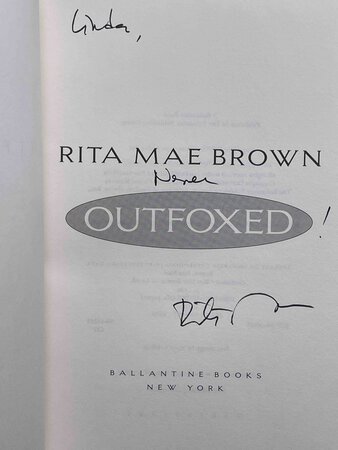 New York: Ballantine, (2000) dj. SIGNED hardcover first edition - Mystery novel set in world of fox hunting in Virginia - one review commented that "Fox hunting is more than just an entertaining way to spend a fall afternoon in Virginia -it's a way of life for everyone involved, from Sister Jane, the Master of the Fox Hunt, to Crawford Howard and Fontaine Buruss, two men who'd kill for the chance to succeed her. By the time a death actually occurs, Brown is three-fourths of the way to the last page, but it doesn't really matter; by this point, the reader is wholly involved in the arcane world of casts, whippers, scent stations, ratshots, and the social rules of the canid and canine communities. And while a man has been murdered, it's the slaughter of the fox used to lure him to his death that really upsets Sister, the strong-willed matriarch who is the novel's protagonist. The thrill of the chase--the hunt itself, not the search for the killer--is on every page of this masterful foray into a fascinating world. And as usual in a Rita Mae Brown novel, the animals have the best lines as well as the last word." INSCRIBED on the title page with the word "never" written above the title. Includes a list of useful terms. 409 pp. ISBN: 0-345428188.