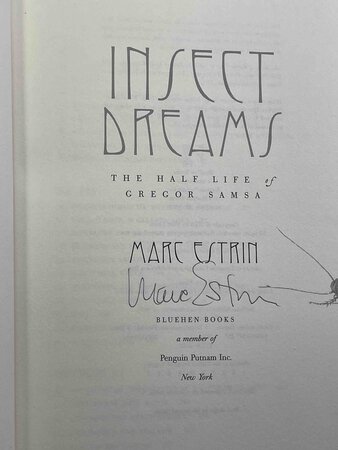 INSECT DREAMS: The Half Life of Gregor Samsa.

New York: BlueHen Books / Penguin Putnam, (2002) dj. SIGNED hardcover first edition - The author's first novel, which continues the story of Gregor Samsa, who morphed into a cockroach in Kafka's Metamorphosis. In this version, he is sold to a Viennese sideshow rather than being swept into the trash, and he quickly becomes the major attraction in entrepreneur Amadeus Hoffnung's bizarre little circus - but once he goes off to New York, he undergoes another transformation, "into a half-man, half-insect superhero whom the author uses to reexamine the first half of the 20th century, with Samsa working behind the scenes as a liaison in the worlds of science, music, business and politics to push pivotal historical events in the right direction. His encounters with Charles Ives, FDR, Einstein and Oppenheimer, among others, are rendered with a combination of humor, chutzpah and intelligence." (PW) Dust jacket praise from Peter Beagle and Tom Robbins among others. SIGNED on the title page. Bibliography. 468 pp. ISBN: 0-399148361.