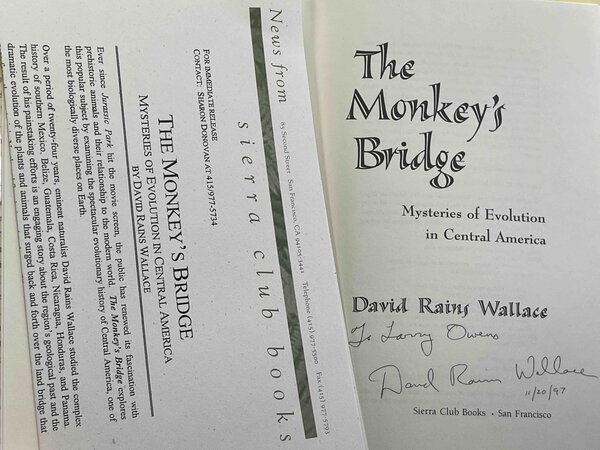 THE MONKEY'S BRIDGE: Mysteries of Evolution in Central America.

San Francisco: Sierra Club Books, (1997) dj. SIGNED hardcover first edition - A look at a unique area - Central American is neither an island nor a continent, but a bridge between two continents - based on several trips made by Wallace over more than 20 years. On his first trip in 1971 to Guatemala, the unusual mixture of animals and plants aroused his curiosity. So he returned time and time again to study the area's complex physiography, mountains and malarial lowlands, high plateaus and sierras, savannas, lively volcanoes, and limestone caves - an area which supported seven percent of the earth's species while comprising less than one percent land mass. In addition in this book, he tells the stories of early explorers - naturalists like the pirate William Dampier and Dominican priest Francisco Ximenez; the fossil-hunter Barnum Brown and paleontologist Stephen Jay Gould. INSCRIBED on the title page to the noted Oklahoma book collector Larry Owens and dated in the year of publication. Review copy with publisher's material laid in. Bibliography, index. xxii, 271 pp. ISBN: 0-871565862.