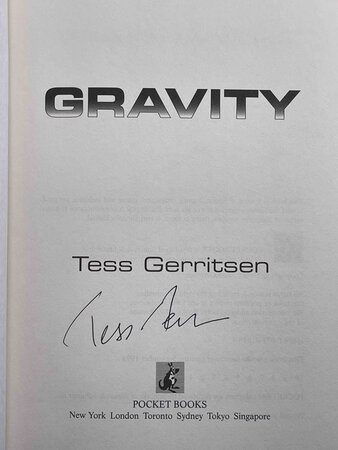 New York: Pocket Books, (1999) dj. SIGNED hardcover first edition - A medical thriller - Stephen King called her books 'an automatic must-read in my house...[she is] even better than Crichton.' The film rights to this novel - about single cell organisms which evolve and become deadly and an astronaut stranded in space - were sold before this book was even published - but Gerritsen was given no credit for the film "Gravity" featuring Sandra Bullock (and very similar to the final quarter of this book) in large part because the company which bought the rights (New Line) was taken over by Warner Bros and Gerritsen was not able to prevail in a suit for breach of contract. Even more interesting, the 2017 film "Life" is very similar to the first part of this novel - but still no credit to Gerritsen. SIGNED on the title page. Includes glossary. 342 pp. ISBN: 0-671-016784.