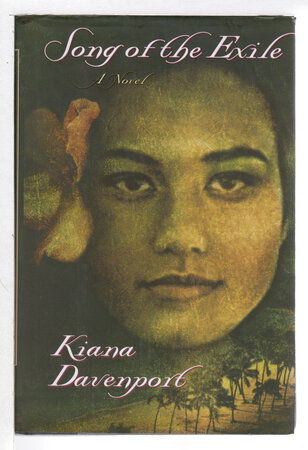 SONG OF THE EXILE.

New York: Ballantine, (1999) dj. Hardcover first edition - A novel set in the turbulent years of World War II through Hawaii's complex journey to statehood - days before Pearl Harbor, "two people meet in Honolulu almost by chance: Keo, a gifted jazz trumpeter native to the islands, and Sunny, a fiercely independent beauty of Hawaiian and Korean heritage. Keo's music takes him from the back alleys of Honolulu to the hidden jazz clubs of New Orleans - and, ultimately, to pre-war Paris, where Sunny joins him, even as the Nazis prepare to march into the doomed city. Caught in the tides of history, the lovers flee separately to the seething chaos of Shanghai, where Sunny searches for the sister she has never known. Captured by the Japanese, Sunny descends into a place of unimagined horror and violation. Keo mounts a desperate campaign to find her--a heroic effort that becomes his destiny." Glossary.Cover praise from such diverse writers as Isabel Allende, Normal Mailer and Gloria Steinem. 360 pp. ISBN: 0-345425391.