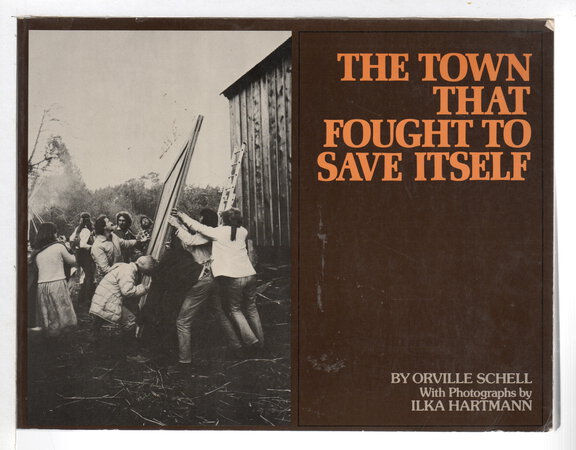 THE TOWN THAT FOUGHT TO SAVE ITSELF.

New York: Pantheon, (1976). First edition - When the beach at Bolinas (referred to as Briones in this book) was hit by a huge and damaging oil spill, followed by a plan from the local Public Utilities District to create a massive and expensive sewer system, the residents of the town rallied and took control. Bolinas,just north of San Franciso in Marin County, is still known for its quirkiness and its reclusiveness - and also for being incredibly expensive. "Bolinas has so far staved off homogenization through town meetings and a nucleus of concerned citizenry. Schell's chatty, generally good humored diary of one year in a four year fight to limit growth on this incomparable little peninsula is as direct as a letter home." (Edward Hoagland, NY Times). Illustrated with photographs by Ilka Hartmann (both Schell and Hartmann lived in Bolinas, so they knew the town and its people well) Slightly oversized oblong format. 200 pp. ISBN: 0-394731697.