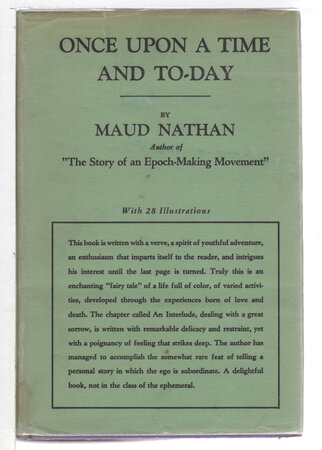 ONCE UPON A TIME AND TODAY.

New York: G. P. Putnam, 1933. dj. Hardcover first edition - The hard-to-find autobiography of a woman born into a distinguished New York Sephardic Jewish family who became - with the support of her husband (the "fairy prince" of this story) - an outspoken advocate for better working conditions for women and for the right of women to vote. She is perhaps known best for her leadership and work as the president of the Consumers' League of New York. She was a first cousin of Emma Lazarus and Supreme Court Justice Benjamin Cardozo. Her sister, Annie Nathan Meyer, was an author and the founder of Barnard College. In 1890 with Josephine Shaw Lowell and other women, she formed the Consumers' League of New York, with a goal of bettering the working conditions of women retail clerks. In 1897, she became the league's president, a position that she held for twenty-one years. Under her leadership, the league publicized the deplorable working conditions in the retail stores and factories. They created a "white list" which named the stores and factories that met the league standards for wages and conditions and urged the public to patronize them. As she became more involved she realized that without the right to vote, women had no clout over the legislatures and she began to devote more time for the right for women to vote, despite the fact that her brothers and sister were opposed to women's suffrage. Foreword by Carrie Chapman Catt. Introduction by Henry van Dyke. Illustrated with photographs. Index. xvi, 327 pp.

Condition: Very near fine in lavender cloth in a very good dust jacket (price-clipped, small chip to top of dj spine, other edgewear and short closed tears, toning to spine of dj.