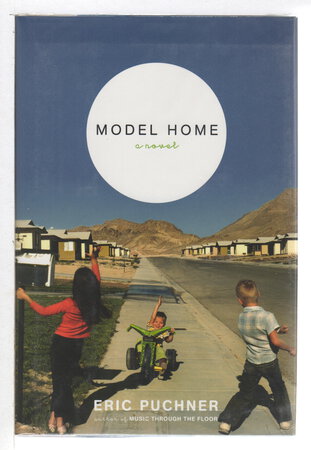 New York: Scribner, (2012) dj. SIGNED hardcover first edition - The author's first novel (his second book, following a highly praised collection of short stories), a finalist for the Pen/Faulkner award, and winner of the California Book Award. Alan Cheuse commented on NPR that "The Zillers on the surface resemble something like a model family when they first move into their new house in an upper middle class, Southern California subdivision . . It doesn't take long for the family finances to fall apart. Dad has been trying to sell some model homes out in the desert, model homes that happen to be within distinct sniffing distance of a large waste pond. And as money becomes scarce, dad has to move the family into one of these houses and take a job as a door-to-door salesman. The kids suffer these problems as well as their own, such as adolescence, a major injury from a house fire and the struggle to try to piece their worlds together while the Ziller marriage falls to pieces around them. Puchner's prose is forthright, delightfully detailed and the distance he strikes from his characters seems just right: not so close that we can't see them in social context, not so far that we don't feel for them deeply in their distress. I came to feel so deeply for them that the book now and then became almost excruciating to read: the feckless parents, the desperate kids struggling to stay alive and in love with a home world crumbling around them." SIGNED on the title page and dated in the year of publication, 359 pp. ISBN: 978-0743270489.