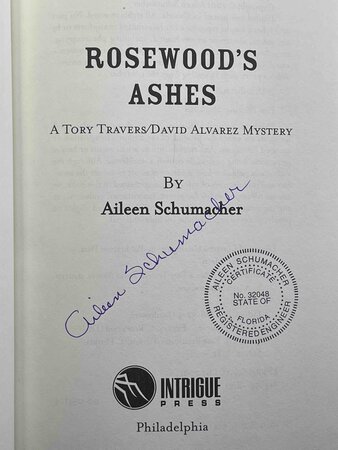 Philadelphia: Intrigue Press, (2001) dj. SIGNED hardcover first edition - A mystery novel inspired in part by the story of a Florida town's destruction - "On New Year's Day, 1923, Rosewood, Florida had its own school, a baseball field, a Masonic Hall, a train station, and three churches. In less than one week it was burned to the ground.. . Returning to Florida to visit her coma-stricken father, Tory Travers prepares herself for the demons of her past as a senator's daughter. Accompanying her for moral support is David Alvarez - friend, infrequent lover, and detective with the El Paso Police Department." However, right after they arrive a woman they met on the plane who was documenting the story of Rosewood is killed - and then another body is discovered and Tory finds herself involved. SIGNED on the title page with the Schumaker's Registered Engineer stamp. Map. Afterword. 347 pp. ISBN: 1-890768324.