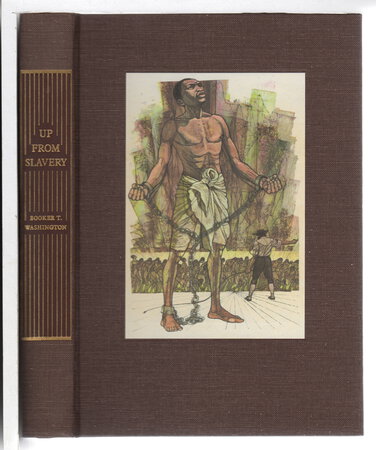 UP FROM SLAVERY: An Autobiography

New York: Heritage Press, (1970). Hardcover - A handsome edition of this classic book, originally published in 1901, with an introduction by Booker T. Washington III and full color illustrations by Denver Gillen, While Washington wrote many other books, this remains his most popular book and one of the most influential books of the early years of the 20th century - and one which has remained in print, and valued ever since . Born a slave in Virginia, Washington went on to become head of Tuskegee Institute, where he emphasized training in practical skills. Includes a chronology. Slightly oversized, bound in brown cloth with illustration pasted on front cover. The Sandglass is tipped onto the front endpaper. xxi, 212 pp.

Condition: Very near fine (bookplate on front pastedown) in a near fine brown slipcase.