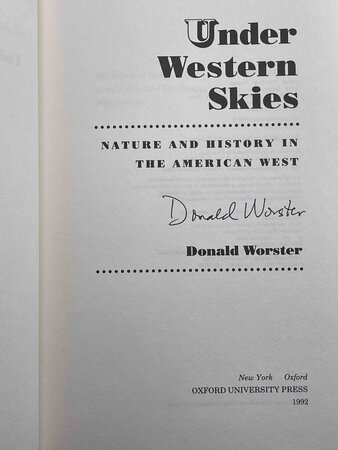 UNDER WESTERN SKIES: Nature and History in the American West.

New York: Oxford University Press, 1992. dj. SIGNED hardcover first edition - A collection of 11 essays which exemplify the "new western history," which focuses on the environment, native peoples, and the concentration of power in the hands of a few. Foremost among these historians is Donald Worster. In Worster's writings, the western past Among the topics he looks at in this book are "the struggle by the Lakota to regain ownership of the Black Hills, examining the importance of the Black Hills in Indian religion and the way they have been mismanaged by the U.S. government. . . the cowboy in terms of the new ecology that arose from livestock ranching - the endless miles of fences, the changes in the environment wrought by extensive grazing, certain species of animals almost wiped out because they were considered a danger to sheep and cattle. . . From the mining ghost towns of the Rockies to the uprooted farm families of the Dust Bowl, nature sometimes wins the struggle. Even the Hoover Dam, he reminds us, may one day be overcome by the patient Colorado River." SIGNED on the title page. Worster received the Bancroft Prize in American history in 1980. Notes, index. ix, 292 pp. ISBN: 0-195058208.