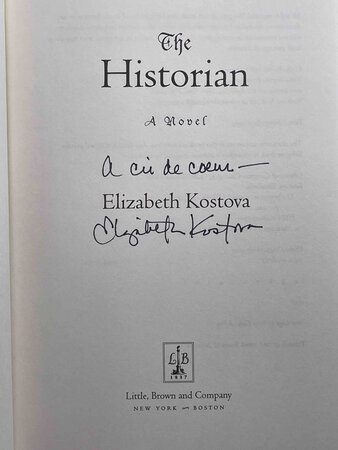 THE HISTORIAN: A Novel.

Boston: Little Brown, (2005.) dj. SIGNED hardcover first edition - The author's first novel, an academic thriller, went quickly into many later printings. From the dj: "Late one night, exploring her father's library, a young woman finds an ancient book and a cache of yellowing letters. The letters are all addressed to "My dear and unfortunate successor," and they plunge her into a world she never dreamed of - a labyrinth where the secrets of her father's past and her mother's mysterious fate connect to an inconceivable evil hidden in the depths of history. The letters provide links to one of the darkest powers that humanity has ever known - and to a centuries-long quest to find the source of that darkness and wipe it out. It is a quest for the truth about Vlad the Impaler, the medieval ruler whose barbarous reign formed the basis of the legend of Dracula." SIGNED on the title page with the words "A cri de coeur." x, 642 pp. Map endpapers. ISBN: 0-316011770.