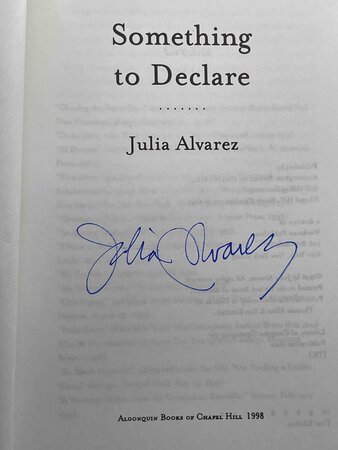 Chapel Hill, NC: Algonquin Books, 1998. SIGNED first edition - Twenty-four essays on her life as a 'hyphenated American' (In 1960, when Alvarez was 10 years old, her father, after a failed coup attempt against the dictator Rafael Trujillo, escaped to a self-imposed exile to New York City, where Dr. Alvarez set up a medical practice in the Bronx while his wife and four daughters set about the serious business of assimilation.), and on how this has influenced her writing. Includes the "Ten Commandments on Writing" - wisdom she has collected from other masters. SIGNED on the title page. 300 pp.

Condition: Near fine in printed brown wrappers (some rubbing to the covers)