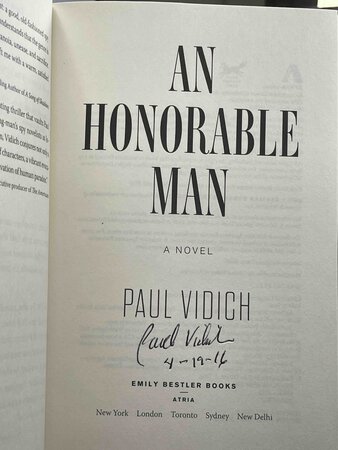 New York: Atria / Emily Bestler Books, (2016) dj. SIGNED hardcover first edition - The author's first novel, named one of Publishers Weekly Top Ten Mysteries & Thrillers of Spring 2016. Set in Washington, DC in 1953, when the Cold War is heating up, McCarthyism is raging - and the CIA has a double agent in its midst. Joseph Kanon described this as "Cold War spy fiction in the grand tradition - neatly plotted betrayals in that shadow world where no one can be trusted and agents are haunted by their own moral compromises." Based on the life of James Speyer Kronthal. SIGNED on the title page and dated in the year of publication. 278 pp. ISBN: 978-1501110382.