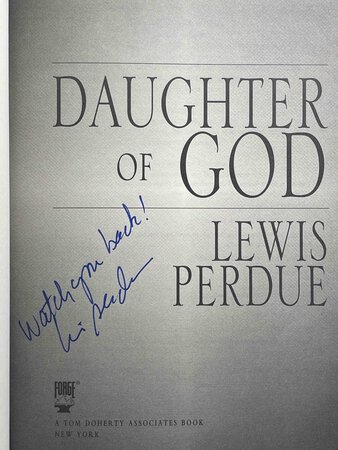 New York: Forge / Tom Doherty Associates, (2000) dj. SIGNED hardcover first edition - "The Nazi plunder of Europe's art and antiquities during WWII sets the stage for a thriller spun around a religious coverup so devastating it could topple the Vatican and crush Western religion. A dying, repentant Nazi, Willi Max, calls renowned American art broker/historian Zoe Ridgeway, to Switzerland, where he reveals his cache of looted treasure, hiring her to catalogue and return it to the owners or heirs. Shortly after she tells her husband, Seth--an ex-L.A. cop turned comparative religion professor at UCLA--about the exciting job, she is kidnapped from their Zurich hotel room." Perdue was sued by Random House when he claimed that Brown's Da Vinci Code plagairized two of his books. He lost the case, but did not have to pay their legal fees. SIGNED on the title page with the words "Watch Your Back." Author's note. 320 pp. ISBN: 0-312-890745.