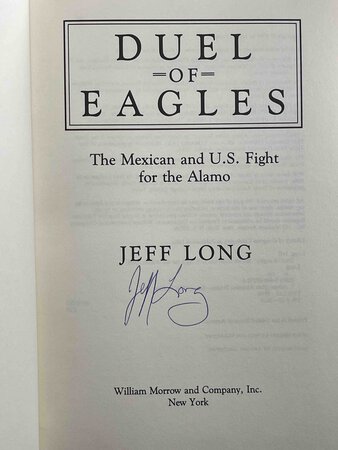 DUEL OF EAGLES: The Mexican and U.S. Fight for the Alamo.

New York: William H. Morrow, (1990) dj. SIGNED hardcover first edition - A controversial account of one of the best known battles in the US - James Michener calls it a "remarkable contribution to Texas history" and in its review, Publishers Weekly calls it a "dramatic revisionist look at the 1835-1836 war for Texan independence" and notes that "Long states bluntly that the 'so-called Texas Revolution was designed only to wrench a huge chunk of Mexican territory free of Mexican control long enough for the United States to annex it.'. . The book emphasizes the white revolutionaries' racist contempt for and brutalization of the indigenous population, and the savagery on both sides during the military engagements at Gonzales, the Alamo, Goliad and the decisive victory over Santa Anna's forces at San Jacinto. Sweeping aside stock legends of the war, Long roasts several famed figures, including Davy Crockett and Jim Bowie. . . Sam Houston shows up as both an alcoholic and an opium addict. Texans will be outraged. Others are likely to enjoy this brazen debunking of sacred local myths." SIGNED on the title page. Photographs. Extensive notes, bibliography, index. 431 pp. Map endpapers. ISBN: 0-688072526.

Condition: Very near fine in a near fine dustjacket (price-clipped)