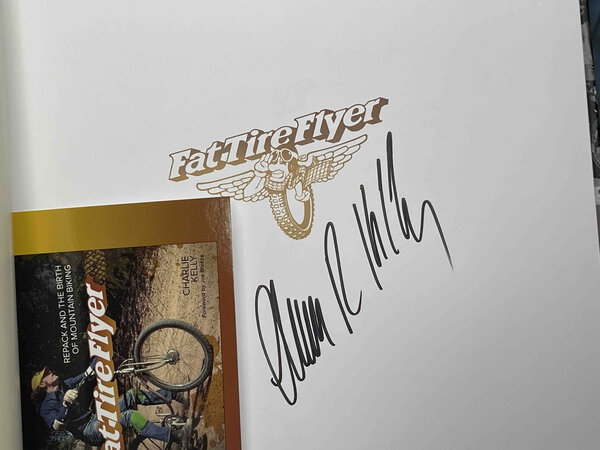 FAT TIRE FLYER: Repack and the Birth of Mountain Biking.

Boulder, CO: VeloPress, (2014) dj. SIGNED hardcover first edition - The complete history of the rise of mountain biking by someone who was there at the beginning and who is one of the founders of the MountainBikes Company, illustrated with many photographs, most in full color, drawings and more. Foreword by Joe Breeze. "It all started with a small crew of bicycle-obsessed hippies bombing the downhill trails of Mount Tamalpais, in Marin County, California. As the friendly competition intensified on the steep dirt trail they called Repack, history's first mountain bikers began craving an upgrade from the old Schwinn cruisers they had rescued from the junkyard.. . this rag-tag group sparked a rapid evolution that transformed the castoff Repack bomber into the modern mountain bike, a refined and elegant machine that quickly became the top-selling bicycle in the world." SIGNED on the half title page. Index. Large and heavy oblong format. Illustrated endpapers. 258 pp. ISBN: 978-1937715168.

Condition: Fine in very near fine dust jacket (a new copy, but with a nick to the dj at the top of the rear fold.)