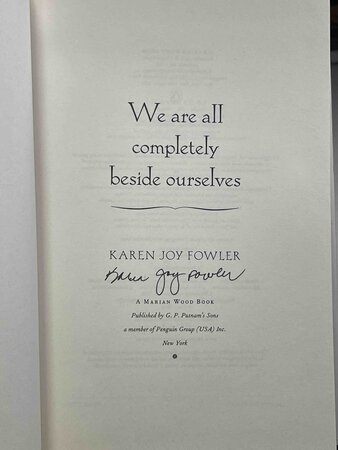 WE ARE ALL COMPLETELY BESIDE OURSELVES.

New York: Putnam, (2013) dj. SIGNED hardcover first edition - Fowler's tenth novel, one which Barbara Kingsolver called "a novel so readably juicy and surreptitiously smart, it deserves all the attention it can get." The novel was shortlisted for the Booker Award, the first American novel to be on that list. Liz Jensen in her Guardian review said "While one family's breakdown, rooted in an act of injustice, forms the bedrock of this astonishing work, the novel's real triumph is that the repercussions of the Cooke parents' broken pact with their chimpanzee child extend, by association, to the family of man and its dysfunctional relationship with the entire zoosphere. Many a novel has devoted itself to exploring variations of Larkin's lament about what mums and dads do to their kids. But if any other book has done it as exhilaratingly as the achingly funny, deeply serious heart-breaker that is Fowler's 10th novel, and made it ring true for the whole of mankind, I've yet to read it. This is a moral comedy to shout about from the treetops." SIGNED on the title page. 308 pp. ISBN: 978-0399162091.