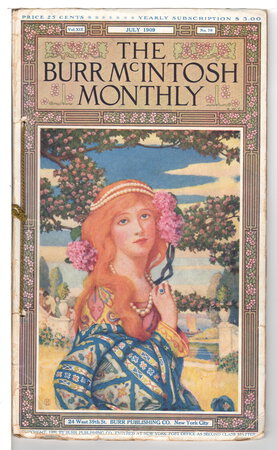 New York: Burr McIntosh Monthly, 1909. First edition - The Burr McIntosh Monthly was a monthly magazine started and edited by Burr McIntosh which lasted from 1903 to 1910. Clark Hobart was the art director. Each issue consisted mainly of high quality photographs, which was appropriate since McIntosh himself was a photographer. Many were of famous people, others were striking scenic images. The issues were bound by string so as to encourage framing of the photographs (among them in this issue are Glacier Point at Yosemite and one of the "coastal giants" - redwood trees) This 1909 issue features a long article on "Picturesque East Africa" by Peter Mac Queen, illustrated with many photographs, including a full page tinted photograph facing the title, and with a tissue guard. Also included is a section of "art studies" - tasteful pin ups of 1909, an article on hallation in photocraft and notably "Some Curious Persons We Meet and Hear From" by George M. Cohan. Many advertisements - the first page is a full page ad by Tiffany. Lovely art nouveau cover.

Condition: Very good (some wear to the edges of the cover, a few pages with short edge tears, but overall very bright and attractive.)