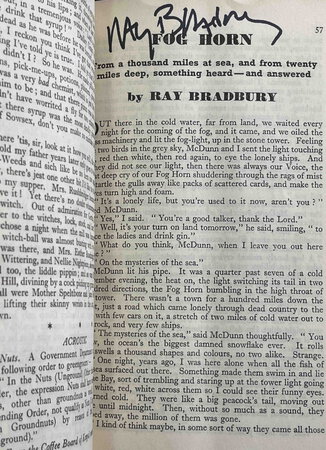 London: The Amalgamated Press / Fleetway Publications Ltd., 1951. SIGNED first edition - A single issue of ARGOSY, a short story magazine in digest size from 1926 to 1974, which published stories and serials by leading authors. This copy is SIGNED by Ray Bradbury at his story "The Fog Horn" and possibly the only copy to be so signed. This was the first appearance in the UK of this story as well as the first appearance under this title. Bradbury's story is also a good lesson on in not believing everything you read on the internet, even when it makes a great story! While this story was originally published as "The Beast from 20,000 Fathoms" in The Saturday Evening Post in on June 23, 1951, and while it might be true that the producers of a film with a similar theme, wishing to capitalize on Bradbury's reputation and popularity, bought the rights to Bradbury's story and changed their film's title, that is not what inspired Bradbury to change the title - this appearance under the title of "Fog Horn" was less than two months after it was first published and in fact, the story continued to be reprinted in anthologies under both titles. Among the other authors included in this issue were Truman Capote, H. E. Bates, Anthony Boucher, Sylvia Thompson, Geoffrey Household (the last part of the serial 'A Time To Kill') and more. 160 pp.

Condition: Fair condition only - crease in the middle, some rubbing and wear to the covers, and the crossword puzzle on the final page has been partially filled in.