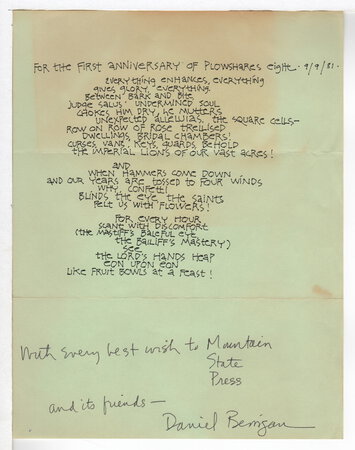 FOR THE FIRST ANNIVERSARY OF PLOUGHSHARES EIGHT - 9/9/81

1982. SIGNED first edition - A poem by this anti-war activist, Jesuit priest, and author, handlettered on light green paper, INSCRIBED and SIGNED on the bottom by Daniel Berrigan. "On September 9, 1980, the 'Plowshares Eight' carried out the first of what have come to be known as plowshares actions. Eight peacemakers entered the General Electric plant in King of Prussia, Pennsylvania, where the nose cones from the Mark 12-A nuclear warheads were manufactured. With hammers and blood they enacted the biblical prophecies of Isaiah (2:4) and Micah (4:3) to 'beat swords into plowshares' by hammering on two of the nose cones and pouring blood on documents. Thus, the name 'plowshares' has been used to identify this action. The eight were subsequently arrested and tried by a jury, convicted and sentenced to prison terms ranging from 1 1/2 to 10 years. After a series of appeals that lasted 10 years, they were resentenced to time servedfrom several days to 17 1/2 months." (Art Laffin, talk Oct 22, 2019) Very uncommon, no copies located in OCLC nor in the trade.